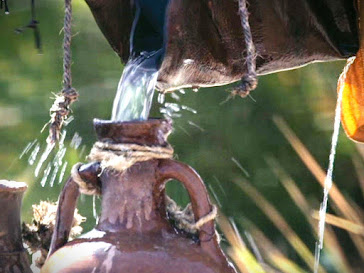 Image courtesy of www.LumoProject.com
The sun was prickly hot that day.
My feet stirred up sand that clung to my ankles
and stuck to the back of my throat
His voice still pounded in my head with each step.
“You had best mind yourself, woman. You will be out on your tail
with nowhere to go if you continue to bother me with your selfishness.
Keep to what you know, Mara, and we will get just along fine.”

Then he pushed me against the wall.
I squeezed my eyes shut and gritted my teeth to block out the inevitable,

my mind searching for a place to hide.
Somewhere quiet
a place apart where I could breathe.

He had gambled and lost a bet so we would be without money
again for the week.
If only he would keep his arrogance in check,
perhaps we could move out of the cramped one room stable
I called home.
He was angry because I asked how we would buy food.
My arm and soul throbbed with the memory of it all.

It was always the same.
My life was filled with dreams that had gone wrong.
Each promise had dissolved and sat bitter in my mouth.
Every time I resolved to make a better life my options would betray me.

It was a matter of choice really and I continually made the wrong ones.
But a woman like me didn’t have many choices.
Once you pick a direction it’s a slow glide from one bad situation
to the next.

At the beginning of my widowhood I was shown such kindness.
Offers to help were many.
But
in my mourning I began wondering down dark alleys and found people
even more lost than I.
In the company of people who had long ago lost hope,
I stopped hoping as well.
The light and warmth of any security faded.
Walking this path each day reminds me of the darkness
in which I merely existed.

But that day while on my way to get water,
I looked up and noticed a figure sitting by the well.
It was a man.
A Jew judging by the way he was dressed.

Perhaps I could get away unnoticed.
This man wouldn’t speak to me.
I could fill the jar and be on my way.

Even if it had been a woman
I could have gotten away without a word.
But there would be a sneer or an indirect comment.
Something designed to break me down
put me in my place.

That’s why I came to the well at midday when the sun was at its hottest.
The other women would be cool in their homes tending
obedient children
and preparing for the return of loving husbands.
That world was far from my reality.

So I made a wide circle to approach from the opposite side.
While I filled my jar
I sensed that he was looking right at me.
I wondered why this man was in our town.
The distain the Jews had for my people was intense.
We were called half breeds and I was at the bottom of the pile.

Slowly I snuck a sideway glance.
He was looking right at me with
the softest eyes I   had   ever   seen.
The moment froze while I felt those eyes penetrate
right through my heart
Deep into my soul where no one had ever been.
There was kindness in those eyes.

I quickly looked away and finished filling the jar.
The last thing I needed in my life was another man.
No matter his gentle eyes, they were all the same.
In the end there would be heartache and emptiness.

But His voice as he spoke was kind
and    somehow
I couldn’t resist.

He asked me to bring Him a drink of water.
I said, “Why are you asking me, a Samaritan woman for water.”
He said that I didn't know who I was speaking to.
He said that he had "living water" to give.
He said that it was from God.

Well He sounded a little too full of himself
so
I asked Him if He was greater than our father Jacob
who dug the well.

This man promised that He had water
that would quench my thirst once and for all
and that I would never be thirsty again.
Not only that but this water would make a well inside of me
that would overflow forever!

When He spoke next I knew He must be a prophet.
He told me about my life but
with such patience and grace
that all I felt was relief.
And those eyes.
Was that love I saw?

I thought, “No Mara, don’t go there.
That’s where you get in trouble.”

But what He offered was different.
It wasn’t based on what I was but
on who He was.
The emptiness I felt couldn't be satisfied
with what I was choosing.

As I listened to Him
I realized that He knew me better than I knew myself.
He somehow knew the deep down hidden pain that
I thought I’d masked so well.
There was no hiding from the ugliness I had been
yet
His tenderness accepted me just where I was.

Still He was a Jew and they worship differently than we Samaritans.
And I told Him that.
He told me that salvation is for the Jews but
a day was coming when God would be looking for those
who worship
in  spirit
and truth.

He said that it wasn’t about location or lineage but about my spirit
Because God is Spirit.

I told Him that the Messiah was coming
and when He came He would tell us the truth and make it all clear.

Then He said “I who speaks to you AM He.”

I could hardly believe what He was saying.
He was the Messiah,
the promised one?

My mind fought against what my heart was beginning to realize.
All of a sudden it made sense.

It was like somewhere a door had been opened and
bright light was shining through.
My darkness was overtaken by
a fluttering   hope.

The overwhelming peace in not having to pretend was incredible.
I had never felt so loved.
Knowing the ugliness of my past and my present
didn't seem to matter to Him.

My future began in that very moment.
I felt my heart weep with joy that I could not contain.
Tears made straight paths down my dusty face.

I left my jars and ran home to tell anyone who would listen that
Messiah knew all about me and loved me anyway!

Ever since that day, I’ve felt bathed in the warmth of mercy
and grace.
I no longer live under religious rules and rituals,
but
I live in a spiritual relationship through the Word of truth.

Who can foresee the things that will change our lives?
Perhaps seeing them ahead of time would make
the final change of heart less glorious.
Living without hope at the end of a rope makes the saving grace
all the more sweet.

I changed that day in ways that will forever mystify me.
Secret places and dark corners of fear where swept clean.
That woman who went daily in shame to the well,
thirsty and worn
now lives face upturned
drenched daily with the quenching water
from His heart.

When the Spirit of God looks down,
He now sees  my spirit looking back
with overflowing hope splashing wherever I go! 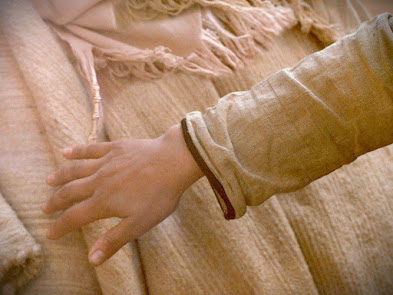